Where “Hunyakia”, the Land that Sends a Medley of Strange Tongues to Indianapolis, is Situated

Homes of the Slovenians

But go out in Haughville where the Slovenians are grouped and where they have their families, and one can see that, after all, these “Hunyaks” have in them some points that may make them, in the second or third generation and by the agencies of the public and church schools, very good citizens. There they have homes as the Americans have, organized on the family basis. Each family takes in boarders and, to the American way of thinking, they may be packed in very closely – eight or ten in a cottage – but still the conditions within these homes are a great improvement over the life of the newly-arrived “Hunyaks”, who come from such lands as Macedonia, from which their wives cannot come. White lace curtains are in the windows of most of the Slovenian homes; there is grass in the yard, a fence around the house and the children, who are in school, speak the English language.

A young girl, barefooted, but clean, was out in front of one of these houses picking lilacs.

“Yes”, she said in quite clear English.

These Slovenians were probably the first “Hunyaks” in Indianapolis. They came long before the recent deluge of these people and long were called only “foreigners”. Many of them have shown that they are here to stay, for they have bought, or are buying on payments, the homes in which they live.

One Effect of the Brewery Saloon

And in this connection is found one of the most interesting features of the “Hunyak” problem. These people who have been here longest and who have made greatest progress toward Americanization have departed from the “coffee-house” and they are the strongest drinkers of the whole “Hunyak” population. They have felt the Americanizing influences, through that institution that is always the one first reaching out for them – the American saloon – and especially the saloon owned not by an individual, but placed in their settlements by a brewery company.

The Hungarian part of the “Hunyak” population numbers about 400. Most of them live on Kingan hill but a few are in Haughville and other parts of the city. Many of these men come from the towns and the cities and are a lower class. They are of the Magyar race.

The Slovenians, who come from Carniola, Styria and “the Krajinmark”, number about 800, and are all in Haughville. They have their wives and children with them, have the best homes, have built a beautiful brick Slovenian Catholic church. Though many are out of work, they have refused to accept the free soup and bread.

Closely resembling them in name are the Slovaks, few in number, who come from the Little Carpathian mountains between Moravia and Hungaria, and who, with the few Bohemians, are a Slav people.

To read the entire article, please feel welcome to download the file below.

Flags of Many Nations in Line

Americanization day was celebrated in Indianapolis today with the greatest demonstration of its kind in the history of the city. More than 5,000 marched through the downtown streets in the great parade and even a greater number took part in the exercises at Camp Sullivan, formerly Military park, later. 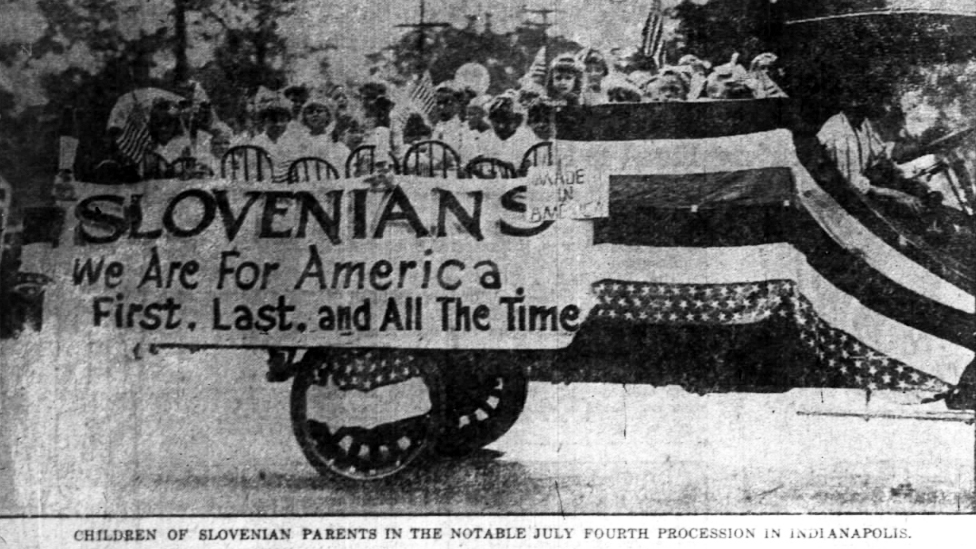 The Slovenian marchers numbered about 350, led by Mike Powell. A truck decorated with bunting and containing a Slovenian pledge of loyalty to the United States carried Slovenian children ranging from three to six years.

A crudely lettered sign, apparently an afterthought, proved one of the parade’s biggest features, containing the words, “Made in America”. The truck containing the children was followed by one in which Slovenian women in native costumes rode.