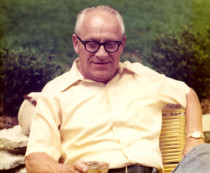 Welcome or dobrodošli to Washie.com!﻿﻿

I am Sasha. Washie.com is my heartfelt present to the family that has made the United States of America my home; the family that has become MY FAMILY since October of 1993 when I was merely an exchange student from Ukraine on the Purdue University campus in West Lafayette.﻿﻿

I have debated for quite some time what to name this family website. After giving it much thought I decided to name it Washie.com to honor a stellar individual, Mr. Rudolph Anthony (Washie) Bozic (1914-1975).﻿﻿﻿﻿

This respected, adored and charismatic Haughville milkman with a big heart, witty sense of humor, mischievous gleam of the eye and infectious chuckle enriched the life of everyone who had the privilege of meeting him. It is not mere chance that Washie is among very few Indianapolis Slovenians to be elected to the Slovenian Hall of Fame. Unequivocally Washie was the epicenter of the Haughville Slovenian Community and is still sending powerful aftershocks through all of us 38 years after his death. I am certain that all family members concur with my decision to name our family website in honor of Mr. Bozic.﻿

Please note that the header of the website contains some meaning. The images on the right hand side of the header represent Europe and Slovenia - the land of our ancestors. You will see an image of Martin Mauser's house where he was born and the coat of arms of the Republic of Slovenia.﻿ There you see an image of Bled Castle situated on the picturesque island of Lake Bled. This image is well recognized by sophisticated travelers and is synonymous with Slovenia.

In the center of the header there is an image of the ship La Champagne sailing from Europe to the Americas across the Atlantic Ocean. On this ship on April 7, 1906 Josephine Mervar departed for America from the French port of Le Havre in search of her American Dream with just $10 in her possession.

She sailed for eight days and as the ship approached the port of New York on April 15, 1906, Josephine’s breath was taken away by the magnificent Statue of Liberty. The 24-year-old immigrant stepped on American soil on April 17, 1906 on Ellis Island. She had to be overwhelmed by the grandiose Statue of Liberty and the American flags - the American symbols illustrated on the left hand side of the website header.﻿ Lastly, you will see the text for our favorite Slovenian drinking song - Kol'kor kaplic, tol'ko let (Živio).

The Washie.com project is one of my very favorite undertakings. Spanning approximately 20 years, this project is indeed a labor of love in which I have invested a big part of myself with unfading excitement, enthusiasm and dedication. It has been an adventurous voyage full of enlightening experiences, mysteries, surprises and discoveries broadening my horizons.﻿

I have gathered the material comprising Washie.com from a plethora of sources, including archives, relatives, internet, and several trips to Slovenia, to name a few. I want to describe briefly some of the things I have done for the Washie.com project.﻿

I also interviewed on numerous occasions Janez (John) Hočevar, our relative-immigrant to Canada from Slovenia. I have talked with and interviewed second generation Americans - Ginger Babcock-Bozich, Dr. Donald F. Bozic, Marie A. Bozic (Swoverland), Charleyne M. Toth (Swoverland), John M. Mauser, Kathy A. Mauser, Joseph M. Toth and many others. I thank you sincerely for sharing with me your time and treasured family stories and photographs. All of you have made an invaluable contribution to Washie.com.﻿

As a result of your participation in this project some rare family photos have become available to the rest of the family. Recently, it was a true joy to be the first one to show Marie A. Bozic (Swoverland) an old wedding photograph of her grandfather Ivan (John) Božič and his wife Ivana Strmljan. Prior to that Marie had never seen photographs of her grandparents on the Bozic side. It was amazing to discover how much Marie’s son Martin A. Swoverland resembles his great grandfather John Božič.﻿

I have found several historic photographs of Haughville and our relatives at the Indiana History Center (Indiana Historical Society) in Indianapolis. Marie A. Bozic (Swoverland) and I spent a day at the center perusing their collection.﻿

I was able to obtain Holy Trinity Church historic records on microfilms through the Church of Jesus Christ of Latter-day Saints, Utah. I spent several days at the Family History Center at 3224 Jasper Street in West Lafayette, Indiana reviewing microfilms. I could not wait until the end of work days or weekends to go to the center and make new discoveries. I have made copies of the most interesting documents and have taken many valuable notes. If you wonder, for instance, how I discovered first communion or confirmation dates - that’s where they came from.

I became a member of Ancestry.com in order to gain access to the largest collection of family history records on the Web. This has been an impressive source of U.S. Census Records as well as birth, marriage, death and military records of our family members. Among the most memorable discoveries while resorting to this resource was the one pertaining to Ivan (John) Božič’s family (Washie’s father). For the longest time I could not find the Božičs in the 1920 U.S. Census Records for Haughville. No matter how many times I thoroughly reviewed the records, the Božičs were not there. I was puzzled and disappointed.﻿

Then, early one morning, I had a breakthrough. It dawned at me that perhaps I should search by address instead of searching by last name. I knew already that Božičs resided at 705 Warman Avenue. Just a few minutes later I was dumfounded. The Božičs were recorded under the last name of Christmas! Of course, it made all the sense in the world; Božič means Christmas in the Slovenian language. I never expected that they would actually alter their last name to Christmas, but apparently they did and used it officially for a short period of time. So in the early 1920’s six-year-old Washie was Rudy Christmas!

I requested and obtained valuable family records from the Archbishop's Archive in Ljubljana (Nadškofija Ljubljana Arhiv), Slovenia. Among these records are church documents confirming birthdates, dates of death, marriages, professions and addresses of our Slovenian ancestors.

The importance of these discoveries can be demonstrated by the following example. Neither Josephine Mervar nor anyone else in our family knew her exact birthday. In fact, at one point she adopted her favorite brother’s (Joseph Mervar) birthday of March 20. Josephine’s Marion County Marriage Record, for example, indicates March 20, 1882 as her date of birth. Her birthday mystery remained unsolved until the summer of 2005 when I received the solicited records from the Archbishop's Archive in Ljubljana. Now we know that Josephine Mervar was born on March 16, 1881.﻿

While pursuing this project I have realized how quickly and relentlessly time wipes out people’s memories and how quickly those who once mattered have merely become faded images on photographs, often with no names. By means of Washie.com we will be able to immortalize our ancestors, remember and thank them occasionally for laying a solid foundation for us upon which we can live, love, enjoy, ameliorate, create and erect "palaces". Washie.com could also become our messenger conveying our stories and images to future generations. I do envision Washie.com developing into a comprehensive family archive - our virtual history center.﻿

I would like to ask you not to be discouraged if your chapter does not currently contain much information. Please always feel welcome to e-mail or mail to me your information and photographs. I will gladly include them on the site. When you send me your photographs for our photo gallery, please identify the people and the circumstances of these photos.﻿

I believe Washie.com has had a nice start, however much still remains to be done. I promise to continue improving Washie.com on a regular basis. Just in case, I will make sure that someone besides me knows how to manage Washie.com. When I am old, I will find a young replacement for me. This site is just the beginning of a journey which may go on for thousands of years. I encourage you to participate and contribute to Washie.com.﻿

I will conclude my letter with the words of a wise man: "History allows us to grow by standing on the shoulders of giants".﻿

With love and respect,﻿