As Sasha conducted interviews throughout Indiana, he noticed that all those he interviewed, who grew up in Indianapolis around Slovenian-born parents and grandparents, spoke with admiration and nostalgia of weekly family gatherings at grandpa Martin Mauser's house. "Why don't we restore this tradition?" Sasha suggested to Marie Bozic (Swoverland). She liked the idea since her siblings and cousins have always remained close and resided within close proximity. After several phone calls the first annual cook-off took place on December 3, 2005, and the tradition was reestablished and has become a great success.

Baking was an event in our family. Sophie and Tina usually got together to make Potica. They would prepare for days, making certain they got the best price for walnuts, the housework was finished and the weather was perfect for baking. Once they began, no one dared to slam a door or let a draft waft through the kitchen, for fear the potica dough would fall!

They would begin baking early in the day (after the kids left for school). Washie would deposit Sophie at Tina’s and they would begin their holiday ritual. Their hair was always covered completely with a scarf and their aprons were tied crisply into place. By the end of the day, their aprons were covered with flour and we knew the potica was almost ready to be baked. They would always cut off the ends of the loaves, before baking, so we had something to sample when the baking was complete.

The loaves were saved like precious gems until the holiday for which they were baked. The aroma drifting from the house on baking days is something that cannot be emulated. No one can replace those times. You haven’t experienced "the good ole days in Haughville" if you haven’t walked up to your house (or that of a friend or relative) to the smells of potica baking in the oven. You knew before you hit the door that a taste experience like none other was about to hit your mouth! A cold glass of Washie’s milk and a fresh piece of potica is about as good as it gets.

Growing up in Haughville (the Slovenian-American neighborhood of Indianapolis) in the 1940’s through 1960’s, potica, alongside strudel (štrudelj), krofe, pohanje, were the most typical and iconic Slovenian pastries.

Potica (poh-teet-sah), also known as povitica (poh-vee-teet-sah), is a yeast-raised dough rolled around a variety of fillings - sweet or savory. Its name derives from the Slovenian word “poviti”, which means “to wrap in”. 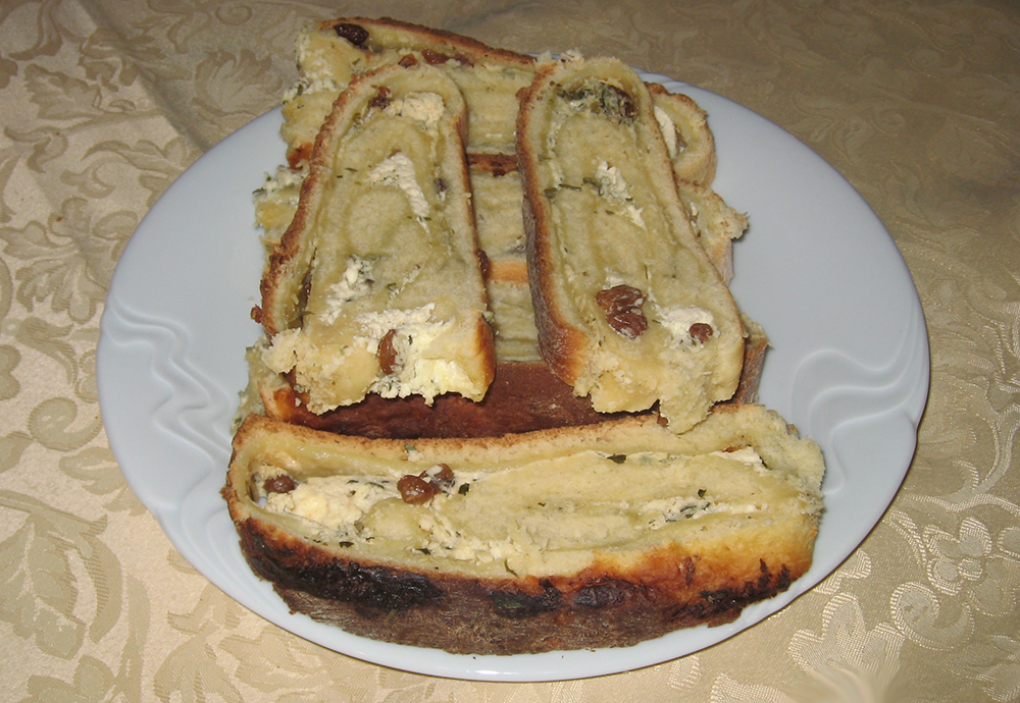 Potica is a characteristic festive dessert made with more than 80 different fillings. It is a ritual Christmas dish and an obligatory Easter blessing food. The most common types of potica include tarragon, honey, walnut, poppy seed, crackling, chive, lovage, and cottage cheese. Potica was first mentioned in 1575 and later “exported” to neighboring countries. Today it is known throughout the world.

Below is a family recipe privided by our relatives from Slovenia. It was emailed to us by Vlasta Šavrič on July 17, 2013. Vlasta's mother (Vika) and Joze Šavrič's mother (Jožica) sent us their best regards along with the tarragon potica (slov. pehtranova potica) recipe. We fell in love with their potica during an unforgettable visit on June 2, 2013.

Put 0,3 liter of milk, yeast and sugar in a bowl and then you heat up this mixture a little bit - on a stove (just as much, so that yeast starts "working"...about 10 or 15 minutes).

Then you add this mixture into flour and mix it. Next, you add sour cream, sugar, lemon zest, rum, 4 eggs, a pinch of salt and slowly stir (mix) all these ingredients into flour. When the mixture starts to get more compact, you knead dough.

Next, let dough stand still for a half of hour (you can left it in a bowl, but some kitchen towel on a bowl, and just left in on a kitchen counter - you don't have to put it in a fridge).

Put all the ingredients (in that order that is listed above) in a bowl and mix it together.

Next, roll out the dough (it shouldn't be too thin) and grease (not sure if it is the right word..what I'm trying to say..you put mixture - filling on a dough, like you put nutella on bread) the mixture on dough. Next, roll the dough together.

Put this roll in an pre-heated oven (not a lot of heat, just a little bit, just as much that the roll rise a little). When that happens, start with baking (180° [degrees] for 1 hour).

Hope you will enjoy it! DOBER TEK!

Mix above ingredients with about 2 cups or more of flour. Roll and cut with pastry cutter. Deep fry until golden. Sprinkle with powdered sugar.

Scald milk and pour over sugar, salt, and butter. Cool to lukewarm and stir in yeast which has been dissolved in the water. Add beaten eggs and about 4 cups of the flour; beat until smooth. Let rise in a warm place until doubled in bulk; then beat for 5 minutes and let rise again (until doubled). Add remaining flour. Roll out on well floured board. Cut out with doughnut cutter and place on lightly floured pan to rise. When doubled in size, fry in deep oil at about 350 degrees F. until golden brown on both sides. Drain on absorbent paper and sprinkle with sugar if desired. Makes 3 dozen.

This recipe was given to Sophie Bozic by Ann Mohr, wife of Anthony.

Add sugar, butter and salt to scalded milk. When cool, add yeast mixture, eggs and flour to make a stiff batter. Cover and let rise until double in bulk. Knead down and let rise again. Form small balls of dough (size of walnut). Dip in additional melted butter and roll each ball in mixture of:

Sift flour into a large bowl. Make a hole in the middle and add sugar and salt. Melt the butter, add milk and heat until just hot. Soften yeast in ½ c. lukewarm water. Add 1 T. sugar and let rise. Beat eggs and sour cream very well and add to flour, along with butter/milk mixture, and mix well. Then add yeast mixture. Beat with wooden spoon until smooth. Place dough in a large, buttered bowl, cover and set in warm area until doubled in bulk. Punch down and divide into four pieces. Place on cloth-covered table sprinkled generously with flour and roll out to desired thickness (about ½ inch).

Beat eggs and sour cream together; set aside. Add milk, honey and sugar to melted butter and heat until hot. Pour over walnuts. Add beaten eggs/sour cream mixture, vanilla and lemon rind. Mix well. Spread on rolled out dough and roll up jelly roll fashion. When rolling up, prick dough here and there with a fork so air can escape and there will be no holes in the Potica. Pat down each loaf (a little) before placing in potica loaf pan. Let rise in a warm place until doubled in bulk. Brush with egg white before baking. Bake at 325 degrees F. for about one hour and 15 minutes - until nice and brown.