Mihael (also Miha) Božič was born on July 26, 1832 in the village of Prušnja vas of Sv. Križ parish, Slovenia, to Jožef Božič and Katarina Sintič in house No.4 (Prušnja vas 4).

Before his marriage, Mihael was a "Häusler" or "cottager" and he resided in house No.13 in Prušnja vas (Prušnja vas 13).

The explanation for "häusler" is: the inhabitants of villages were divided into social groups. The cottagers (häusler) - day laborers, owned a small house with enough land around it for a small garden and a few small farm animals. Most of the population consisted of day laborers scratching out a marginal existence.

Prior to her marriage, Neža was a "½ Hüblerstochter" and lived in the village of Hrastek, house No.2 (Hrastek 2), of Sv. Križ parish. Villages of Prušnja vas and Hrastek are located a short distance from each other.

Mihael Božič and Neža Barbič married on November 18, 1867 in Sv. Križ parish. After the wedding the newlyweds moved to Mihael’s house, No.13, in Prušnja vas (Prušnja vas 13). Michael still remained a "Häusler" or cottager.

All Mihael and Neža's children were born at the address above: 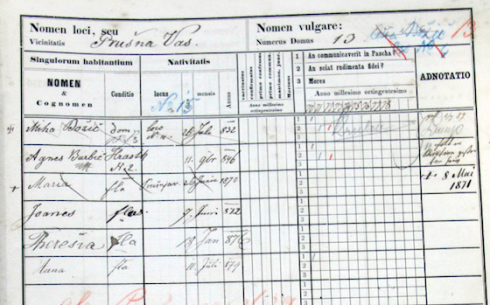 Mihael Božič died on July 1, 1887 in Croatia days shy of his 55th birthday. It is unknown where and when Neža Barbič died. One thing is known that she did not die in Sv. Križ ob Krki parish.

Their daughter Terezija Božič died on September 16, 1933 in a Zagreb hospital, Croatia.

Note: Mihael and Neža's son, Janez (also Joanes, Johann, John) Božič, immigrated to the United States of America in 1898, where he married Ivana Strmljan on November 4, 1905 in Indianapolis.

Some of Neža Barbič's ancestral last names and towns include: